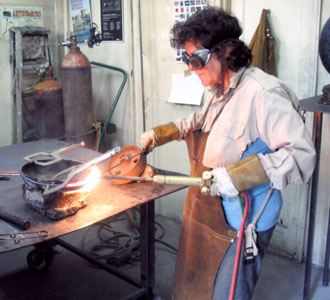 Martha was born in 1953 in Kansas City, Missouri, the youngest in the family, and the only girl. The family moved from Kansas City to St. Louis, Missouri, followed by Carmel California, and Seattle Washington, all by the time Martha was eight years old. The Walkers moved to Sweden for three years, starting in 1961, spending one full year in a remote forest location. After this, Martha landed back in the United States, attending both junior high and high school in Miami Beach, Florida before her move to Brooklyn, New York, where she attended Pratt Institute from 1971-1976, majoring in sculpture and drawing. Martha stayed in Brooklyn, going back for her Masters Degree at Pratt Institute from 1999 – 2001, where she graduated with honors. She is now a Brooklyn native, married with two children.

The unusual travel history of her youth was precipitated by her parents’ desire to travel. Her father, Leonard was a nuclear physicist opposed to the arms race, opting instead for medical research. (Leonard was credited with the original use of radioactive isotopes as a means of tracking infection and cancer in the lymph system.) His research laboratory was a place that Martha frequented, viewing microorganisms under the microscope, something that she sites to this day as an influence on her abstract visual perspective. Additionally, Martha’s middle brother, David, was an avid painter, who “raised the bar” for her artistically.

Other influences on Martha came from the frequent relocations as a child. The most obvious was the disparate geography that she observed, from the American Plains, to the Pacific Coast and mountain ranges, along with the rich Swedish forests, followed by the Atlantic Ocean and sandy beaches in Florida. However, the cultural influences were also important. In almost every new place, Martha became aware of what it meant to be an outsider, looking in, especially in Europe, where she became acquainted with Jewish children whose parents were survivors of the Holocaust. This had a profound effect on her, even as a nonreligious Jew, resulting occasionally in work with themes of Jewish identity and the Holocaust.

When asked, Martha will tell you that she considers herself to be an emerging artist. Her business career over the course of her lifetime enabled her to establish a financial foundation for raising a family. As a welder, her art was not something that she could pursue in her spare time at home, or without the considerable expense of a fireproof studio including the necessary accessories and equipment. When she returned to school in 1999, she started welding again, and with her financial situation improved, Martha established her first welding studio in 2001. It is in the interim that she has created her first body of work.